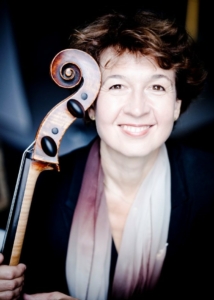 Xenia Jankovic was born into a family of Serbian and Russian musicians. The cello soon became her instrument of choice and she made her debut with the Belgrade Philharmonic Orchestra at the age of nine. A government scholarship allowed her to study at the Central Music School of the Moscow Conservatory with Stefan Kalianov and Mstislav Rostropovich. She then went on to study with Pierre Fournier and Guy Fallot in Geneva and with André Navarra in Detmold. Later on, intensive work with Sandor Végh and György Sebők led to a deepening of both her musical ideas and her artistic ideal.

Xenia Jankovic rose to international fame by winning the first prize at the prestigious Gaspar Cassado Competition in Florence. Her concerts as a soloist with the London and Budapest Philharmonic Orchestras, the Madrid, Berlin and Copenhagen Radio Orchestras, her recitals in Paris, London, Berlin and Moscow, where she is regularly invited by numerous festivals including Lockenhaus and Ernen, have been enthusiastically acclaimed by the public and the critics alike. She plays chamber music with András Schiff, Gidon Kremer, Isabelle Faust and Bruno Giuranna, among others. Since 2004, she has been teaching cello at the Detmold Musikhochschule and is asked to give master-classes worldwide. Xenia Jankovic plays an exceptional 1733 cello by Gregorio Antoniazzi (workshop of Domenico Montagnana)